The 2021-22 Stöckli Ski Collection has an impressive number of diverse innovations. “Whether you love ski resort slopes, or are a free rider, or a ski touring enthusiast, every single taste can look forward to fantastic new innovations in their preferred segment,” says Mathieu Fauve, director of technology & design as well as research and development at Stöckli. You’ll find out more here about what the highlights are, all about the development of the ski models, and how even an exotic lotus flower is a part of it all. 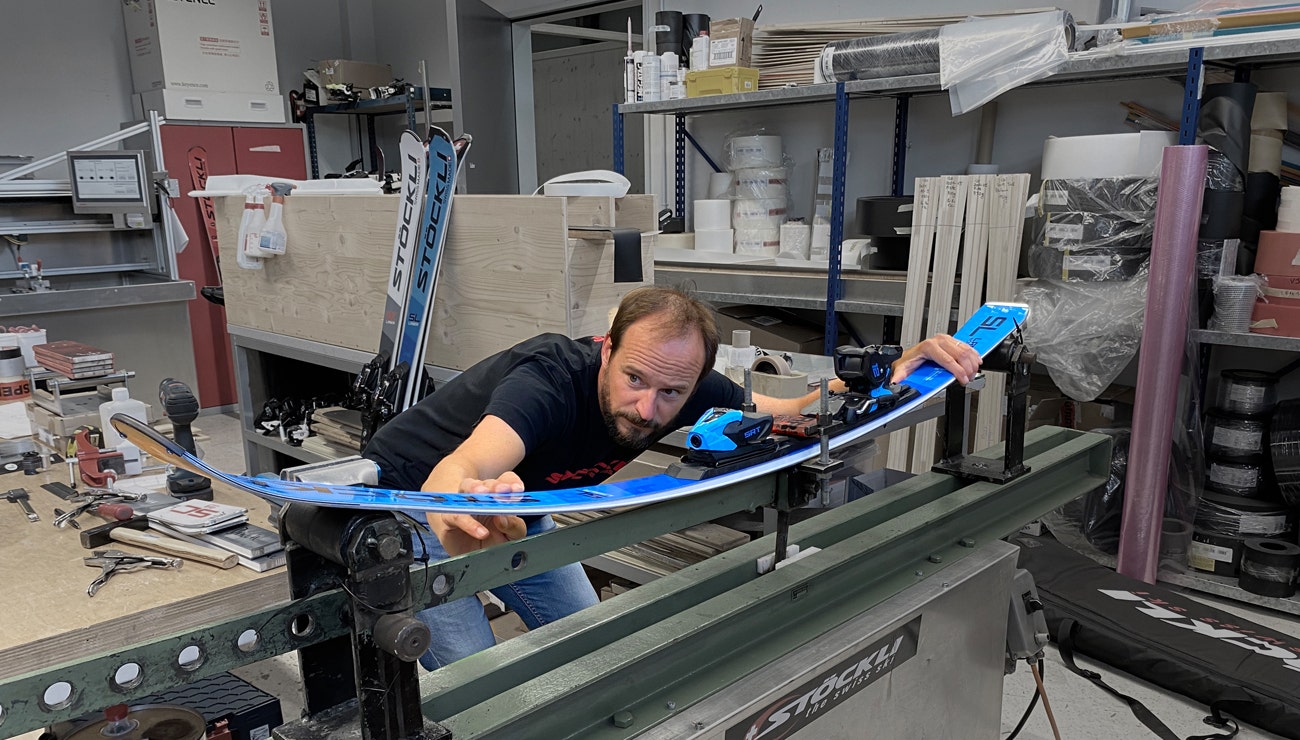 For more than 10 years, Mathieu, himself a passionate winter athlete, has been responsible for the development of new models and the evolution of current ski models. A time-intensive process that demands about two years – a year or so on the development and about a year for the industrialization. “That demands sometimes a bit of flexibility in your character since you are always working two years in the future. Right now, I am already quite busy with the 2023-24 collection,” he says. “But I won’t want to reveal anything about that yet.”
So let’s stop back into the near future – and that means winter 2021-22. Let’s start with the innovations in the popular Laser line, which for the coming season in particular means the Laser GS and the Laser SL. The Laser GS will be newly outfitted with the Carbon Steering Control (CSC). “This technology stems directly from racing and lends the ski better stability and smoothness. Last season, it was already added to the Laser WRT ST, and we have had very good experience with it,” Mathieu noted. That succeeded at accentuating the typical characteristics of the Laser GS.

With the Laser SL, a new sidecut geometry has been added. Meaning the ski tail is now somewhat wider than prior. This promises improved edge grip and more acceleration coming out of the turn. Also new is the Flex Torsion Control Technology (FTC). These special slits in the Titanal are vital to make the ski smooth and forgiving, Mathieu explains. “Without this feature, the performance would be more like that of the SL FIS.”
With that, Mathieu alludes to a point that for him represents the biggest challenge in the development of new ski models. And that it is always about perfectly melding performance and control with each other. “The performance aspect is already very strong in our skis simply because of the construction. My challenge is then that every single person, regardless of his or her ability, can ski with them and also have fun.” The athleticism can then be tweaked depending on needs with the appropriate combination of plates and bindings. “That’s the big advantage of the plate-binding system designed just for our skis – it always harmonizes with them, even when the ski models are re-engineered and further refined, he says.

Further into the Laser range are the Laser SC and the Laser AR with a new appearance, too. Here, however, the adaptations are primarily focused on the visuals. Even that is essential, “because with new, modern designs, one can create increased visual value for customers.” In that regard, the new Laser SC Orea is an especially impressive number. “My absolute highlight in this ski collection,” says Mathieu with excitement. With this, we have succeeded at a unique and exciting combination of performance and exclusive design that we have up to now never had in our portfolio.

Smattered with highlights, too, are our new All-Mountain and Freeride collections. The old buddies Stormrider 88 and 95 have gotten a facelift and thus have a completely new, unique design. “The application of a new lacquer on the topsheet rounded out the playful aesthetic of the new Stormrider models and also offers more protection from scratches.” Of course, something has also been going on with the technical aspects. “At the shovel, we have integrated a lighter and yet more stable materials, lending the ski more float and better maneuverability,” he says again with enthusiasm. New in this range is the Stormrider 102, which replaces the Stormrider 105. Thanks to an increased front rocker, a new sidecut geometry, and the use of a synthetic material at the tail instead of aluminum, this ski is more playful and nimbler than the prior model.
Ski touring enthusiasts can look forward to a special new product. With the Edge FT, we now have the perfect companion for pow tours in our line. Here, for the first time in a ski model, we are using the “Vario” concept. That means the waist width varies depending on the ski length. Meaning, the longer the ski, the wider it is. “Shorter and lighter skiers don’t make the same demands on a touring ski as taller or heavier people,” he notes. “And that’s where this comes in, because we want to guarantee our customers an ideal relationship between ski and skier characteristics.”

And now what about this story with the lotus flower, which has to do with the Edge FT. “Inspired by the water-resistant petals of the lotus flower, we have developed a special coating for the topsheet so less snow sticks to it,” Mathieu says. On the one hand, this has the benefit of needing to schlepp along unneeded weight when climbing, and on the other hand it makes transitioning with your skins much more pleasant.

The lotus flower as the source for ski inspiration? Where did that come from? As a graduate in structural engineering with about 25 years of experience now in product development for snow sports, Mathieu can reach back of course into an enormous repertoire of knowledge. An essential part is often played out by Mother Nature, plants, and animals. That is nearly an endless source of new ideas and often serves as the foundation for innovation. But translating that is however not always so easy. “That’s why we also work together with scientific institutions such as the Federal Institute of Technology in Lausanne, the Lucerne University of Applied Sciences, or the Zurich University of Applied Sciences. Consequently, the development of new technology involves separate research projects that run parallel to the ski development and also demand a little more time. This has particular importance and meaning for racing. “You really have to always stay on top of things because the development in racing defines the development of the entire industry,” Mathieu says. Customers benefit over and over from new insights and technology that come directly from the World Cup to mass-produced skis.

You always must be on attention. Evolution is good, revolution not always so. Models steeped in tradition such as the Laser GS or Laser SL have their particular characteristics that should remain as such. “Sometimes you have new ideas or features at the ready, but you can’t implement them because they would alter greatly the basic nature of the ski,” notes Mathieu. As a result, a great deal of meaning is given to testing prototypes because that’s what offers you direct feedback about how each technology change affects the performance characteristics. “That is of course a huge benefit of my job that you always can hit the slopes to try out new models,” Mathieu adds.

Mathieu skis at least once on each model, not to mention at least once on innumerable prototypes. So, which then is his personal favorite? “They are all so fantastic, that it’s difficult to pick one out,” he says. “In general, I love big sweeping turns.” On well-groomed and grippy slopes he turns to the Laser GS at 175 cm, otherwise he gladly falls back on the Laser AR. It all comes down to your personal tastes. “And I’m quite convinced that we have the perfect ski for every kind of skier in the current collection.” We are ready for winter – Are you, too?