Odermatt returns to Europe as the leader

One victory, a second place – Marco Odermatt’s winnings in Beaver Creek are something special. The skier from Nidwalden returns to Europe leading the World Cup overall standings. 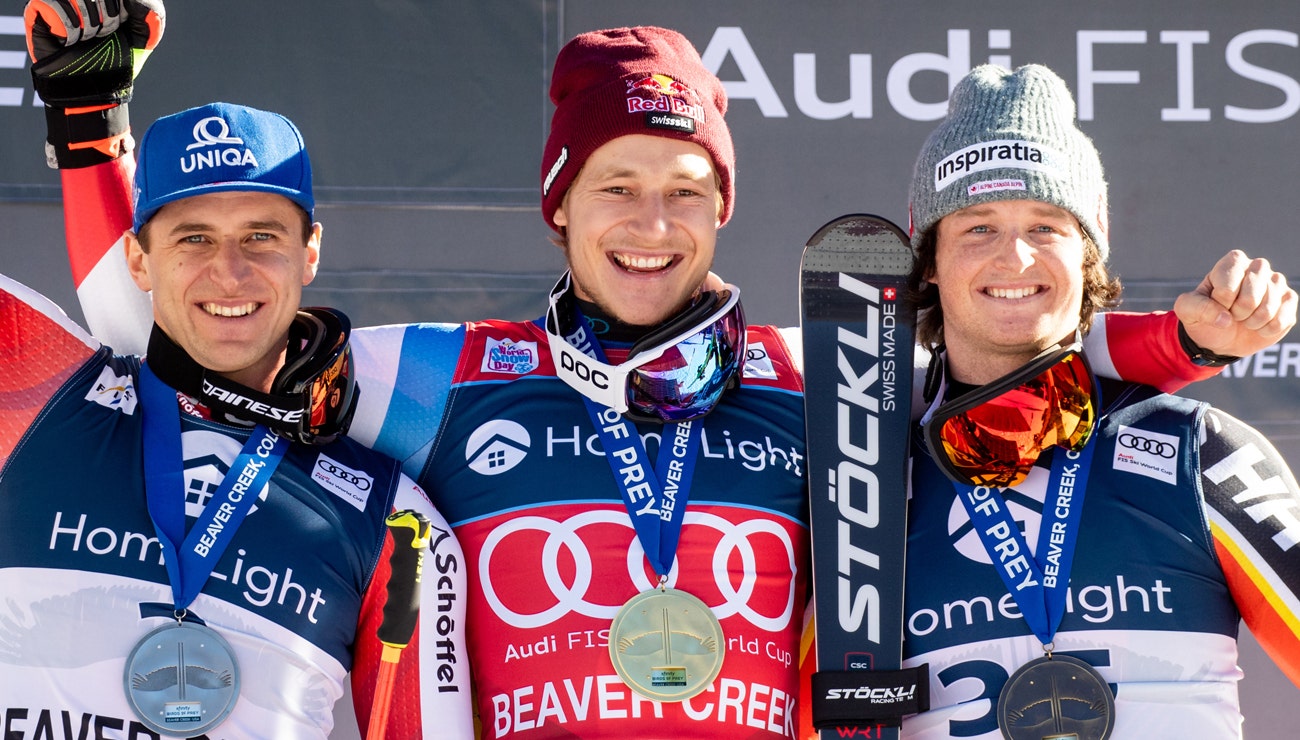 The long-running symbiotic relationship between instinct skier Marco Odermatt and Stöckli equipment is spot-on this winter, too, as well as in the speed disciplines. After a win in the giant slalom in Sölden and a fourth place in the downhill at Lake Louise, people were on the edge of their seats to see how “Odi” would work it out with the infamous “Birds of Prey” run in Beaver Creek.
The answer came immediately in the first race. Odermatt won the first Super G with a gap of 0.78 seconds over Austrian Matthias Mayer. And the manner in which he did so was convincing, proving how ski racer Odermatt has developed, as well as how he continues to add new components to his appearances. After his victory, Odermatt compared it with his first World Cup success in 2019, which he had also celebrated in Beaver Creek. “Two years ago I landed a lucky punch with a lot of luck for the win since I had pushed myself beyond the limit. Today, I was also at my limit, but I had everything under control.” On the sometimes tricky course, Odermatt had the feeling periodically that he wasn’t skiing so well. He wanted to correct these assumed weaknesses by taking a few extra risks in the final section. At the end he “corrected” excellently in that he ended up with a rather huge gap over second place with 78 hundredths of a second.

Stöckli skier Odermatt then proved the day after that he not only shows quality on the piste but also is a sportsman off the piste. Less than 24 hours later, a tiny difference of just 0.03 seconds were missing for the 24-year-old to grab a second win. It had been difficult for him, he said, to find the needed oomph after his victory the day before, and he expressed great respect for athletes such as Marcel Hirscher who had ticked off any number of series of wins in his career. But then he uttered the very sentence that really is so Odermatt: “Of course I would have loved to have had those three-hundredths on my side. But I am super happy for Alex (Aamont Kilde) getting the victory. He is coming back from an injury and really earned it.”

In the only downhill, Odermatt then made a mistake in the middle section that made a classification any higher than 15th impossible. After six of 36 World Cup races, Odermatt with his 346 points sits at the top of the World Cup overall classification. The next meetup is on Dec. 11 with the giant slalom in Val d’Isère.

After a long injury layoff, Thomas Tumler’s 2021-22 World Cup season kicked off happily with top-30 finishes in two races, while 13th place in the downhill on Saturday for Slovenian Martin Cater was a bright spot. This was Cater’s best World Cup result since his surprise victory in the downhill at Val d’Isère almost exactly a year ago.
After downhill training runs, Ilka Stuhec was able to be a little more calculated for the races at Lake Louise. Ultimately, though, the two-time world champion, who has also already won races in Lake Louise, ended up in places 16 and 20 in the results. The hoped-for step forward when it comes to results wasn’t quite there yet. But taking into consideration that Stuhec always has a little more difficulty with bad visibility means you can’t read too much into the results.

Noemie Kolly however had some bad luck. In the first downhill, the skier from Romandy part of Switzerland hit a gate with her right forearm in such an unfortunate way that she couldn’t participate in other races. An uncomfortable contusion of her forearm musculature and the nerves there made it impossible for Kolly to properly grip the pole. Starting in the races on Dec. 11-12 in St. Moritz should however not be a problem.