Take a look at him at work, and at first everything looks really quite normal. Layer after layer, the materials are laid down in the forms, then off to the presses it goes. You can only recognize that it’s a racing ski by the topsheet. Indeed, take a closer look and you will quickly notice that when building racing skis there is just a little more going on. And there is just one man responsible for that: Sascha Prévot, 42, for the last seven years a ski builder at Stöckli with a specialty in racing skis. 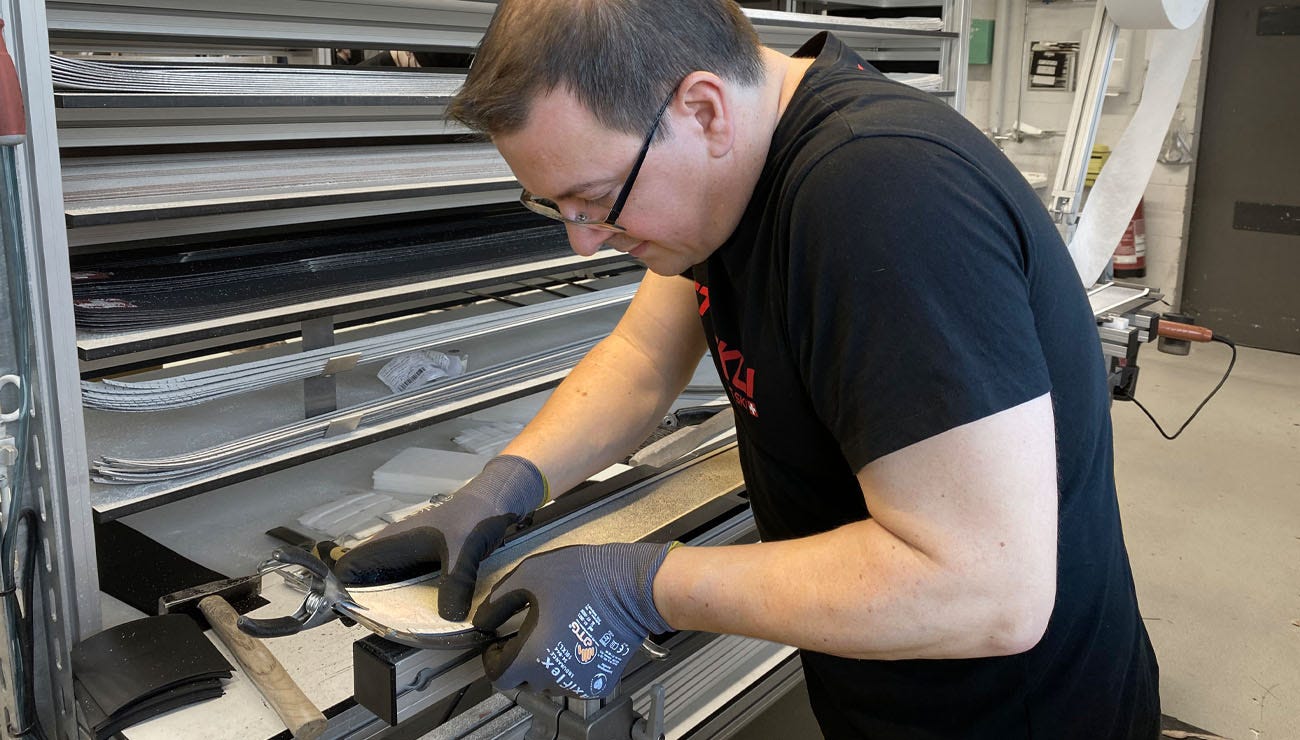 “It is really stupendous when Marco celebrates at the finish, reaching high with his ski in hand, and you know that is your ski, I built that ski.” The pleasure and pride is really evident when Sascha speaks of his work as a ski builder and specialist for racing skis. Being a specialist for Stöckli’s racing skis means not only great pride but also huge responsibility. “When the skier bombs down the hill at 140 kph or more, I am hoping of course that my skis hold up to all that,” says Sascha about it. “And of course, luckily they actually always do.”

The demands on a racing ski are great, even more than with a normal ski. They must not only be extremely robust to be able to handle the extreme stresses, but also fast, really very fast. That is reflected not just in the manner of construction. During production of a normal mass-produced ski, several people work on it through the manufacturing process. With racing skis, however, only Sascha works on them, from delivery of materials and construction to pressing and shaping to grinding the base. “Ski construction, A to Z,” he calls it. And all of that in the same place where mass-produced skis are made: in the Malters facility. Along the way, each step in the process has its own challenges.

Everything has to fit together down to the tiniest detail; high precision is a must. There are for example the FIS standards that have to be adhered to down to the millimeter. There is so little wiggle room that even weather and temperature affect Sascha’s work. “It has happened that in the morning I measure out the layers and cut them, and then in the afternoon they don’t match up to the rest of the materials because for example the wood in the core has now been impacted.” That’s why racing skis are usually made on the early shift and not necessarily at all during the height of summer because temperature variations over the course of a day can be quite large. It would be contradictory if the fastest skis were produced on the hottest days of summer.

Speaking of fast skis, Sascha prefers to build downhill skis. Because they have to hold up to the most stress. Plus, there are many different layers demanded, making for a really varied and exciting task. “Of course, ski builders also succumb to competitive ambition, and you want to build the fastest skis,” he says with a wink.

Generally, it is the variety of the job he has been doing at Stöckli for seven years that he appreciates. Because that is precisely what he always missed sooner or later at his previous jobs. “Here, technical expertise is demanded to work with different systems and equipment. There is always something to do that demands my craftsmanship and skills, and I like that a lot,” Sascha says. Variety also comes from the various preferences and skiing styles of the athletes. Every athlete skis differently, needs another type of build. Sascha develops and implements that with the development team.  “I know immediately for example when I build a ski for Marco Odermatt that this ski is so special that nobody else could ever ski with it.”

That Sascha even became a ski builder really was just chance. Neither his training as a motorcycle mechanic nor his job in a brewery or work as a coffee machine technician ever indicated that one day he would build skis for the best ski aces. Even in his personal life there was no such indication. Sascha doesn’t even ski himself. “I of course love the outdoors and being out in nature, but more when it’s warm and dry,” he adds with a chuckle. He follows World Cup races on TV whenever it’s possible because naturally he wants to see his skis in action. Still, Sascha must admit, “When a Stöckli skier is at the start, I really get very nervous.”

Over the years, his ties with Stöckli have become deeper and deeper, and Stöckli is these days much more than an employer. “It is a real honor to work for such an exclusive brand. Not everybody can say they do that,” he says.

For him there is not only the pride in making winning skis for athletes such as Marco Odermatt and Fanny Smith, but also the pride in working for the Stöckli brand. “Stöckli to me stands for Swiss made, for quality. A small but great brand that achieved big things with little means, which it will most certainly continue to do.”