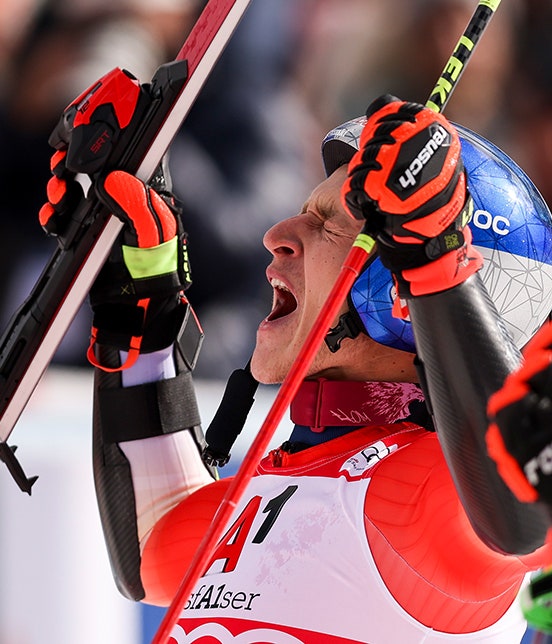 Marco Odermatt was so relaxed in Sölden, he himself was shocked! Sponsor events, interviews, media interviews – the 25-year-old shrugged them all off with a laugh and didn’t feel any pre-race nerves until shortly before the start. Just in time for the first race of the winter, though, the familiar tingling feeling was back and Odermatt achieved what he’d (almost) always done successfully last season: he played with the terrain and let fly his technical skills. The result: a clear lead after the first run.

“But that’s only half the battle,” he said after it in an interview with broadcaster ORF, wagging a virtual finger at himself. He and his service man Chris Lödler knew that, as the last man down the slope, he’d encounter different conditions than in the morning. Nevertheless, because the set-up had worked so well the first time, they decided to tackle the second half of Sunday’s race with an identical one. The sunshine, and the 29 runs before Odermatt’s, had made the snow slippery. The Nidwalden champion suddenly came face-to-face with this change in conditions during his second run. He managed a quick correction and continued on down the steep slope to the finish line without any further wobble.

As happened last year, Marco Odermatt was met with the green light, so he’s now one of five athletes who’ve won Sölden at least twice in a row. Those before him have been Alexis Pinturault (2016/2019), Ted Ligety (2011/2012/2013), Bode Miller (2003/2004) and Hermann Maier (1998/2000). Even more impressive is Odermatt’s cross-season consistency: he’s ended the last nine World Cup giant slaloms on the podium – six times as winner. And, among that lot as a kind of encore, an Olympic gold medal.

Despite the composure he’d shown before and in Sölden, Marco Odermatt was relieved after his win. “You never know what might happen in the summer,” he said in TV interviews, describing his preparations for the season. He was alluding to the Matterhorn Cervino Speed Opening which was cancelled at the last minute. Because of that, his preparations had been somewhat different than in previous years, and he wasn’t sure if he was ready for the winter season. That said, one thing was clear to him before the start of the second run: “Everyone’s going to make mistakes here.” That’s why he fought on after his little wobble. And this battle turned out in such a way that rivals lost a whopping 76 hundredths of a second (Zan Kranjec) and more to Odermatt in the final count.

There was also a great start to the season for Stöckli’s second athlete: Rasmus Windingstad, who also opted for the same set-up for both his runs, took a fine fifth place.
Gallery Slider
This ranking equals Windingstad’s best result since the Norwegian started using the skis from Malters. The 28-year-old intends to continue doing his best.

In the meantime, Saturday’s women’s race, in which Andrea Ellenberger and Vivianne Härri would have competed, had to be cancelled due to heavy snowfall and rain in the lower section of the track. Whether an attempt will be made to organize the race again, and if so, when and where, remains to be seen.