The A-Team steps into play

“A” … as in Aline or Andrea. Aline Danioth and Andrea Ellenberger are the last of the Stöckli women athletes to step into World Championship action. The Central Switzerland A-Team in Are shares a service staff member and an apartment. 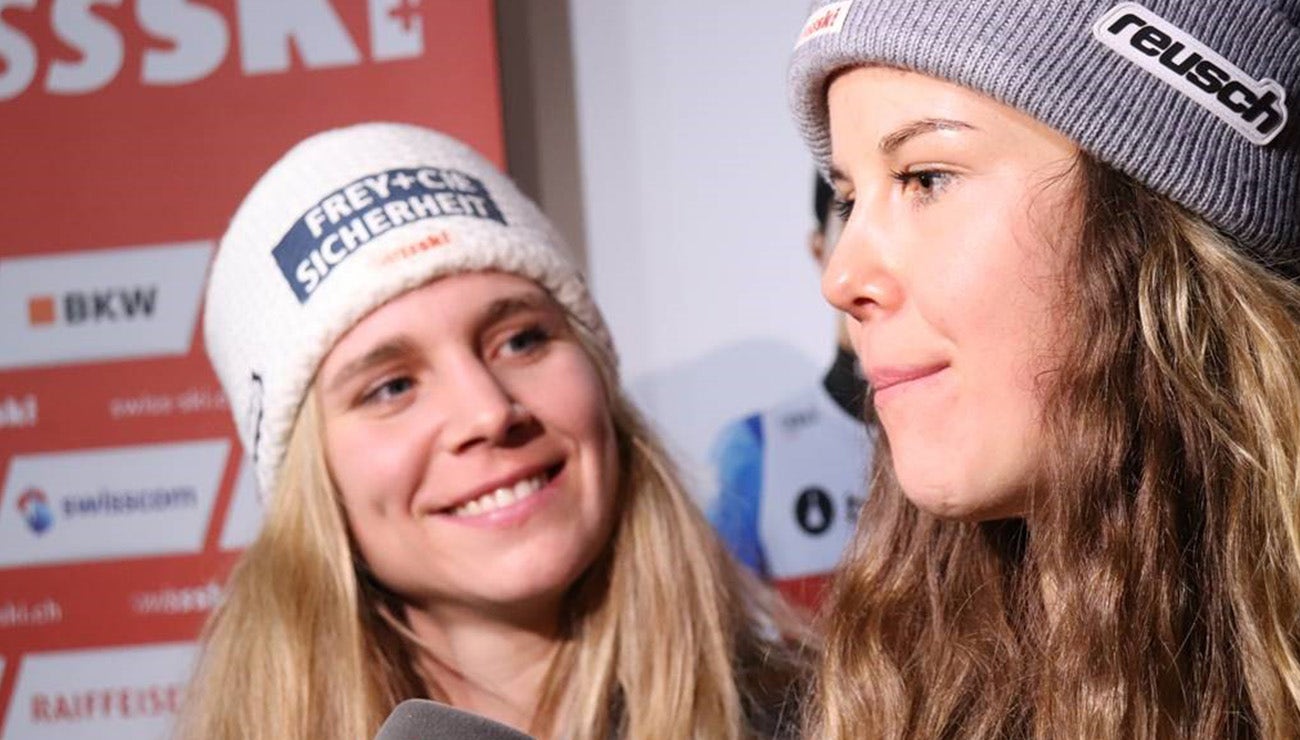 For both it is their first time taking part in a World Championship. The two are sharing an apartment in Are. Both will be able to take on their races without huge pressure, and both have now already won. There are, however, a few differences. Andrea Ellenberger is older and would love to sleep in more in the morning, and Aline Danioth will compete in Are in races other than her current World Championship roommate. But both love to laugh, have cheerful temperaments, and look forward to everything they will experience in Sweden.

Aline Danioth is 20, a three-time Junior World Champion, and was a starter in the team event on Feb.12 alongside Daniel Yule, Ramon Zenhäusern and Wendy Holdener, and will be in the slalom (Saturday). Andrea Ellenberger is 25, studies psychology, and will ski in the giant slalom in Are (Thursday). “For me, it’s a huge honor to be part of the Team that won the Olympics in 2018,” says Danioth, from Uri, Switzerland. A Team Event is something special for an individual athlete. In particular when at the end there is also a medal to be had – as for Danioth her gold at the 2018 Junior World Championships. “It is simply a huge joy when you can share the achievement with others.”

On Saturday, her participation in the slalom will be the realization of a childhood dream: Starting in an individual race at the Ski World Championships. And then too in Are. How perfect. “My first World Championship memories stem from the Ski World Championships in 2007 that also took place in Are. At that time, Anja Pärson really cleaned up,” recalls Danioth. Now, she can experience Are for herself, and she really likes the village with just about 1,500 inhabitants, she adds. “It’s even a little bit magical here. The weather is constantly changing, some sun, then a little snow – I like it both ways. And I like the little red houses. Since I was small, I have been a Sweden fan, and I would like to come here in the summer sometime.” First, though, it’s still winter, even when the forecast for Wednesday is for temperatures above freezing with rain. And in the winter, Aline Danioth’s focus is on her core business: skiing fast. To that end, she is supported really well by Stöckli every single moment, all the way up to the minute she leaves the start gate and heads down the piste when she is then totally on her own. “I feel really good with Stöckli,” says Aline Danioth. “I really appreciate the short distances and the relaxed rapport.

For Andrea Ellenberger, whose first World Championship memories also go back to Are in 2007, her World Championship participation is an unexpected highpoint. After a long injury layoff, and during her often single-handed battle back stemming from her passion for skiing, Ellenberger’s goal for winter 2018-19 was to be healthy enough again to be able to ski. And now here she is on the World Championship team – the skier who wasn’t a member of any Swiss ski team. A super crazy development. “Suddenly, the World Cup opener in Sölden became a reality for me,” recalls the skier from Nidwalden. “Out of that came a full World Cup season, and that I can now ski in Are at the World Championships is simply frosting on the cake. I would never have dared to dream of it.” Perhaps her path to Sweden from the outside could be seen as a ‘easy skate’,” speculates Andrea Ellenberger. But that is of course not at all the reality because behind it is tons of work and hardship.

She is in Are to show what she can do, says the 25-year-old. And being at the victory celebration for Corinne Suter’s medal was for her more motivation. Years ago, Andrea Ellenberger could prevail in kid’s and youth races against Wendy Holdener and Michelle Gisin. Today, the then-competitors celebrate medals from huge events and victories in World Cup races. “I learned to celebrate with them, be happy for them. That was for a time not so easy because occasionally the thought slips into your head, ‘That could be me standing there if things had developed differently’,” says Ellenberger, fully honest.

The skier from Central Switzerland is supported in Are by Stöckli service guy Primoz Gregoric. And she is very happy about that. “When it comes to equipment I have outstanding support. Nevertheless, I want to be involved in that area because in recent years I took care of so much on my own and have thus gained the knowledge needed. This professional coexistence works great. Not having to prep my own skis allows me more time to invest in recovery or training.” And that is a really nice upshot precisely at the World Championships where skiers have other appointments other than just athletic happenings like training or races.